So a kind of disenchantment started before the death of God, or perhaps this itself was just an illusion, ‘Enlightenment created other Gods busy behind the scene of the screen.’ (Michael Taussig). So enchantment has been transformed, or transfigured into capitalist society. Another way of seeing it is that when enchantment is banned or repressed it returns in the form of the uncanny, hauntings, ghosts and zombies. Things neither living nor dead. Giorgio de Chirico gives a compelling description of this uncanny feeling.

‘Perhaps the most amazing sensation passed on to us by prehistoric man is that of presentiment. It will always continue. We might consider it as an eternal proof of the irrationality of the universe. Original man must have wandered through a world full of uncanny signs. He must have trembled at each step.’ Giorgio de Chirico, ‘Mystery and creation.’ P58 Art in theory.

When I read this I am reminded of Mary Shelley’s description of Frankenstein’s monster when he finds himself alone in the woods, the ultimate feral child. The monster is the result of rationality gone wrong, a creation made without love or beauty.

This feeling of being haunted was expressed and taken apart beautifully by the Surrealists. They looked back to the bursts of repressed material that manifested in the marvellous and other aspects of Gothic imagery in what Hal Foster describes as an attempt to re-enchant ‘a disenchanted world, a capitalist society made ruthlessly rational.’

What he means by disenchanted world is not so much a world without God, but the regime of spiritless production and consumption that was and is capitalism. The surrealists used some of its own language, that of the shop window and the outmoded and turned it back on itself, and in doing so revealed repressed material, 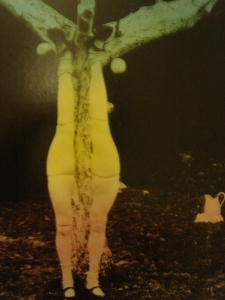 unleashing the uncanny elements of the automaton or mechanised human, and the fetishization of the female form, this kind of extreme caricature revealed what it was capitalism was doing. They wanted to burst open the bourgeois banality of social existence, exploit taboos, a kind of shock tactic. The surrealists reacted to the modern world like Frankenstein’s monster, with the fresh eyes of a ‘primitive’, as if the city was a forest full of signs. It was a new world. Making art is a way of transforming this feeling of anxiety into curiosity, and gaining some feeling of control.

In his book about the caves of Lascaux, Georges Bataille describes (speculatively) men who were discovering prohibitions, and entering from the animal world into the world of man. First he worked and then he played. Not all of those paintings are acts of magic; some are made in the spirit of festival, excess and play. They were learning to transgress those prohibitions, usually around sex, but primarily about death. Through art we played, broke the world of prohibition open.